You don’t need thousands of licenses and a massive Tableau Server installed in order to share your visualizations across an organization.  There is a Tableau Server alternative available.  Please keep in mind that this solution may not work for everyone as once Tableau Packaged Workbooks have been distributed, there is no way of blocking access to the workbook or recalling it. It’s the same concept as sharing a PDF or Powerpoint file. Once it’s been emailed or saved on someone’s computer, it’s available for potentially unauthorized consumption and distribution.

“Tableau Server is too expensive.  I have a tight budget and need to do more with less.”

Tableau Server is almost always the optimal choice for enterprising your Tableau workbooks.   If your budget is thinly stretched, odds are you won’t unable to afford Tableau Server Licensing fees.  Don’t let that get you down, there’s a practical solution.  You have the ability to mirror a similar architecture of Tableau Server, to house your workbooks in a series of shared network directories.

Here is an example of what the traditional Tableau Server hierarchy looks like: 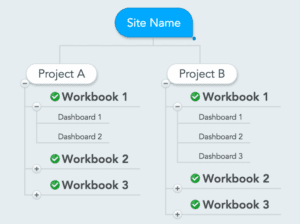 At the top of the hierarchy we have our Tableau Site.  The site is a top-level folder and generally is how departments across an organization will separate from each other.   For example, your organization’s Finance and Human Resources departments will more than likely have separate Tableau sites as they analyze very different data sets and wish to keep their dashboards private.

The next level down is called a Tableau Project.  Think of a Project as a folder that will house your Tableau workbooks. There is no other directory required to store workbooks and dashboards as they’re already packed into the workbook file.

Every workbook that’s published on a Tableau Server must reside in a Tableau Project.  Again, a project is just a folder that can hold one or many workbooks.

Traditionally, when we publish our Tableau Workbooks to server we must first sign onto a Tableau server: 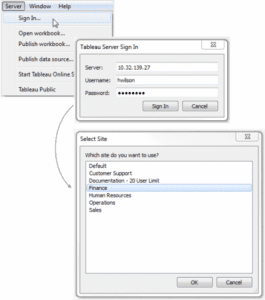 Prior to the final publishing you’ll need to: 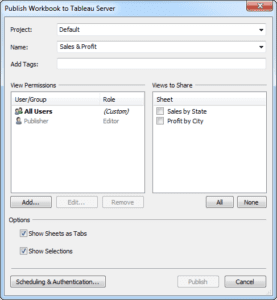 So in the above example we published one Tableau Workbook which consisted of two dashboards into the default project folder on the Finance site.

Take a look at this non-Tableau server hierarchy:

At the top level, we have our pseudo site which is just a folder named Finance.  Inside of the Finance folder we have two additional folders, one for Project A and another for Project B.  Within each Project folder we can store our exported Tableau Packaged Workbooks.

What does this mean in terms of necessary licensing and resourcing to establish this alternative model?

In a perfect world, you’d only require one Tableau Developer using a licensed version of Tableau Desktop @ $1999 year ($399/year thereafter).  This developer would be responsible for manually refreshing data and overwriting the existing Tableau Workbooks within the Project folders. It’s a monotonous task, however if these workbooks only really need to be a few times a year, the level of effort involved in minimal.  Once the workbooks are in their packaged format (.twbx), then can be opened up by anyone with access to the folder that contains the workbook using Tableau Reader.

If you require more frequent data refreshes, I’d recommend automating the refresh process by using a tool like Alteryx. Using Alteryx, you can define a regularly scheduled workflow that executes a refresh of data, packages up the workbook, and spits it out into your directory of choice.  Alteryx is definitely not cheap at ~$5,000 year per license.

Why use Tableau Server when there is a much cheaper Alternative?

If you really want a hardened server appliance where all of your data, workbooks, permissions, and security rules reside, go for Tableau Server.  If you’re a smaller shop or just want to test out sharing your workbooks before diving into the huge expense of acquiring Tableau server, try a more localized Tableau Packaged Workbook and Tableau Reader approach on a network share drive.  In time, if you need more power and automation, opt for Tableau Server.

Quickly get up to speed on all things Tableau